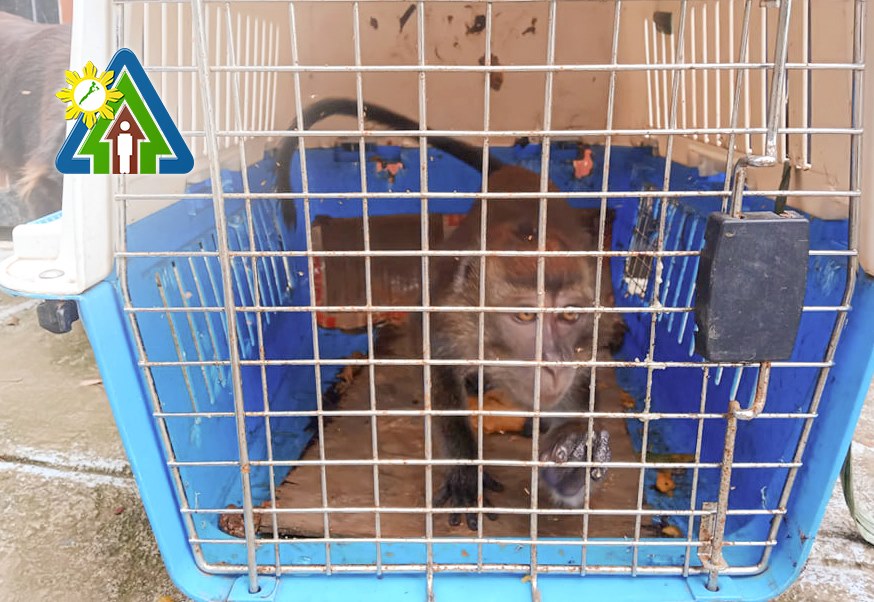 One adult Philippine Long-tailed Macaque or Philippine Monkey (𝘔𝘢𝘤𝘢𝘤𝘢 𝘧𝘢𝘴𝘤𝘪𝘤𝘶𝘭𝘢𝘳𝘪𝘴 𝘱𝘩𝘪𝘭𝘪𝘱𝘱𝘦𝘯𝘴𝘪𝘴) and one Palawan Hill Mynah (Gracula religiosa palawanensis), commonly known as “Kiyaw,” were both turned over to the Palawan Council for Sustainable Development Staff (PCSDS) on January 22, 2021 by Mr. Steven Bills of Barangay Bagong Sikat, Puerto Princesa City, and Mrs. Lorna Delicana of Barangay IV, Municipality of Roxas, Palawan, respectively. The Philippine Long-tailed Macaque measures approximately 76.2 cm in length and its weight is approximately 2 kg. The Palawan Hill Mynah has a wingspan of 51 cm and weighed approximately 230 grams. Mr. Bills narrated that the said primate has been in and out of their premises since December 22, 2020, trying to feed on the food of their dogs. This compelled him to turn over the monkey to the PCSDS as he feared that their dogs might harm it if they will not do anything about it. Concerning the Palawan Hill Mynah, Mrs. Delicana voluntarily turned it over to the PCSDS after taking care of it after some time. The said Philippine Long-tailed Macaque and Palawan Hill Mynah were brought to the Palawan Wildlife Rescue and Conservation Center (PWRCC) for their rehabilitation on January 22 and January 23, 2021, respectively.

The Philippine Long-tailed Macaque is listed as an “Endangered Species” while the Palawan Hill Mynah is listed as a “Critically Endangered Species” under PCSD Resolution No. 15-521. The PCSDS is urging persons who happen to find or rescue wildlife to turn them over to our office, which can be contacted thru hotline numbers 0935-116-2336 (Globe/TM) and 0948-937-2200 (Smart/TNT). You may also send a message to our Facebook page for your concerns.